Why the Greeks Hold All the Cards

It's amazing what sucky negotiators Europeans are. The Greeks in particular. I mean, look at how long this whole Greek debt negotiation thing has dragged on. It's pathetic, honestly.

The Greeks need to bring in an American negotiating team, preferably a bunch of UAW hard-liners from the 1960s, guys from the Jimmy Hoffa School of Charm. Guys who'll tell you what's what.

Syriza leadership seems pretty soft. Put them in with a room full of neoliberal thugs conservative hard-asses (Merkel and her crowd) and they fold like a wet sandwich.

Seriously, the Greeks are killing me. They act like they don't know they're holding all the cards.

In this case, Greece owes how much now? Over three hundred billion Euros? 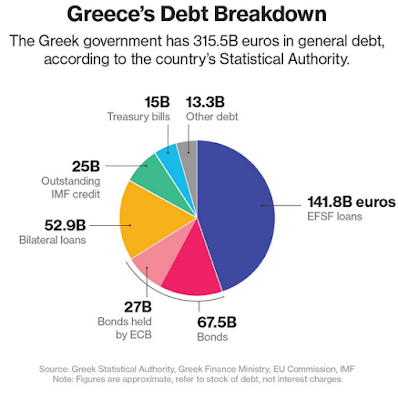 Where I come from (southeast L.A.), that means the Greeks actually call the shots now.

If things go wrong in Greece, the distance from where the Greeks are now, to rock bottom, is relatively short. The Germans have much further to fall; much more to lose on the way down (even if it's not a trip to the bottom). Remember that old Mel Brooks joke about the difference between comedy and tragedy? Let me paraphrase. If a Greek goes bankrupt, that's tragedy. If a German drives his BMW into an open sewer and dies, that's comedy.

This could very easily turn out to be a comedy. The kind of comedy that isn't actually very funny if you own German or French government bonds (which have already undergone a huge selloff ahead of the Greek default), or you are counting on the Eurozone economic recovery (you know, the one that's just over the horizon?) to materialize, or if (say) you happen to be a politician running for reelection in a creditor country after Greece melts down.

Long story short, it means Ms. Merkel, not the Greeks, should get her f*cking kneepads on, right, now, and start begging for terms, while she still can. The future of the Bund, not Greek bonds, is what's at stake now.

Greek negotiators should be wasting no time telling (yes telling) the Troika how this is going to go.

There will be a default; that's Non-Negotiable Item No. 1.

The reason there will be a default is that (do we really have to spell it out at this point? what are we here, children?) there's not enough money right now, okay? When the country is doing well enough to run a 2% annual budget surplus (which it will never do under austerity programs that only move the country further away from such a goal), it will still take Greece many decades to pay off the existing debt. Therefore the only question now is how to structure the default in a way that might, conceivably, in theory, allow the Eurozone's shitty little economic recovery to continue without another fifty gazillion Euros in useless Quantitative Easing and (more to the point) without German auto workers eating cockroach sandwiches for lunch for the next twenty-five years.

Non-Negotiable Item No. 2 is that Germany and the others will apologize for the rudeness they've displayed in prior negotiations. And cancel the interest on the latest round of payday loans.

Non-Negotiable Item No. 3 is that there will be no more talk of "reforms" that destroy people's lives.

And by the way, we intend (speaking now as a Greek negotiator) to use the money we borrowed (and are keeping, for as long as we want), which is all in Euros, to pay our people in Euros, which will still be the preferred currency in Greece even if you choose to force us out of the Eurogroup, which it's actually in your best interest not to do. But if necessary, we will also create a new drachma, including a gold-containing coin to physically anchor the drachma to gold so its value doesn't vary. (The 112 tons of gold in our possession will, of course, be used, henceforth, to back the new drachma instead of the Euro. We will end up with a currency that is more gold-backed, and more stable, than your Euro.)

All talk, going forward, must focus on the terms of the default.

Everything else is negotiable.

Would you like to be paid back at a rate of one Euro per year for 300 billion years? No? Okay, then let's talk about how much preferred stock you want to buy in the newly nationalized Bank of Greece, or in the new Greek Resolution Trust Corporation (the new "bad bank" which will manage the work-out/wind-down of distressed assets from all Greek financial institutions over the next five years), and so on. And by the way since this is a default, we will deal with each creditor individually, as a special case. There is no longer any need for group meetings. We will evaluate each creditor, from the smallest bond-holder to the largest institutional lender, one by one, and pay each one back according to their need, and their ability to work with us, not against us.

Maybe you'd like a bit of bread, by the way? Some olives? A little wine, perhaps? Sit. Please. Have a seat. Relax. Let's talk.

We have much to talk about. Yes?