Global Debt Has Reached $200 trillion, or 286% of Global GDP (mckinsey.com), most of it government debt, much of it Chinese. Full report (PDF, 3Mb) here. 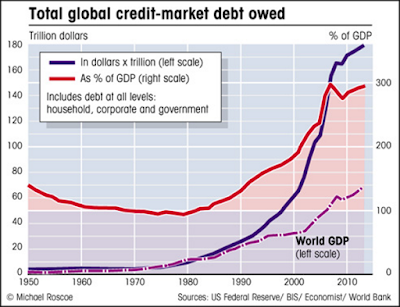 What's behind Saudi Arabia's new muscularity (csmonitor.com). The Kingdom's new leadership is hawkish and burning through money like crazy.

Iran now faces a water crisis (al-monitor.com). In addition to the Saudis buying nukes from Pakistan.

And yes, the Israeli defense minister really did threaten to nuke Iran (mondoweiss.net).

Five problems with self-driving cars (livescience.com). The issue with software freezing has to do with non-deterministic garbage collection, which unpredictably "stops the world" at odd times.

Google has now closed off distribution of Chrome extensions via any venue other than the Chrome Web Store, because malware (zdnet.com).

Peter Thiel is backing away from plans to build floating tech zones in international waters (wired.com) because, basically, state and local government subsidies and tax breaks are still so lucrative on shore. And also, an offshore campus would cost $50 billion.

The country's richest Congressman, with a net worth of nearly $500 million, says America’s poor are actually doing very well (thinkprogress.com). Except, the U.S. ranks 30th in life expectancy, 27th in "freedom over life choices," and is on a par with Pakistan for upward mobility, so maybe Mr. Issa needs to do a little more homework before saying America's poor are "the envy of the world"?

Why Are Interest Rates So Low? (libertystreeteconomics.newyorkfed.org). Wonkish piece, the thrust of which is that Fed policy is not actually all that accommodative, given prevailing ultra-low "natural" rates.

Join us every Friday for non-mainstream news of the weird and wonkish.