Only 7.7 million people have ever done 50 or more posts on Google+. Hard Numbers for Public Posting Activity on Google Plus (stonetemple.com). Various stats show Google+ to be, far and away, the biggest social network no one ever uses. But it lives on, because Google. 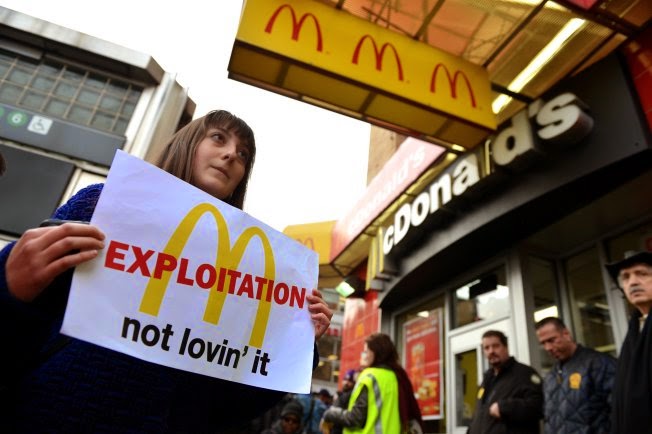 Americans are spending $153 billion a year to subsidize McDonald’s and Wal-Mart’s low wage workers (wahsingtonpost.com). Ken Jacobs, Chair of the UC Berkeley Center for Labor Research and Education, writes about the fact that in the U.S., most social-program spending (52%) goes to people who already work for a living. Minimum wage is thus corporate welfare, plain and simple.

By the way, that magical, mythical world in which McDonald's pays workers $15 an hour? It's called Australia.

At Apple's Foxconn sweatshop supply facility in Shenzhen, China, suicides (totalling 19 in 5 years) seem to have subsided now that buildings have been completely surrounded by netting to keep workers from jumping to their deaths. Apparently the netting is a cost-effective alternative to, say, paying people more, or providing more humane work conditions. Where Apple Products Are Born: A Rare Glimpse Inside Foxconn’s Factory Gates (recode.net).

In 50-49 vote, US Senate says climate change not caused by humans (bangordailynews.com). I feel so reassured now. Don't you?

In Wisconsin, a bill to prevent Food Stamp recipients from buying shellfish (thinkprogress.com). What's with this creepy punish-the-poor fetish lately?

7 reasons why ‘I’ve got nothing to hide’ is the wrong response to mass surveillance (amnesty.org).

One Nation, Under Guard (NYTimes.com).

When A Rising Tide Sinks Most Boats (jacobinmag.com).

Why Are US Special Operations Forces Deployed in Over 100 Countries? (thenation.com)