Half of All Jobs May Go Away Soon

Lately I've been reading Thomas Piketty's magnificent bestseller, Capital in the Twenty-First Century, which  is an essential work for understanding income and wealth inequality, patterns of wealth creation, the relationship of economic growth to capital growth, etc. It's clear, well written, suitably empirical, easy for the non-specialist to understand, and generally agenda-free. I have mostly (overwhelmingly, in fact) good things to say about it. But I do have a carp or two.

One minor carp I have is that Piketty consistently and repeatedly assumes and states (without providing evidence) that increases in human life expectancy stem from advances in medical science. The reality is far more nuanced. I think many scientists would, if pressed, readily admit that the advent of indoor plumbing and hot running water probably made a bigger contribution to human life expectancy than all vaccines ever invented. Certainly it's not hard to show that most vaccines came along well after the diseases in question were under control (see graphs below and more here). The idea that medical science is responsible for most of the increase in human life expectancy of the past 200 years is frankly little more than a self-serving narrative invented by the medical industry. Piketty buys into it uncritically. 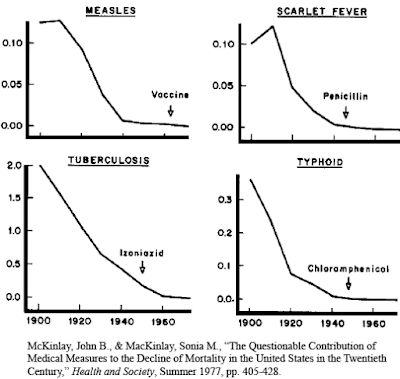 A more significant shortcoming of Piketty is that he has so little to say about the transformative nature of technology in economic history. Here, I would expect Piketty to know his stuff. But he mostly sidesteps technology, leaving it the unmentioned elephant T. rex in the room.

Does anyone really doubt that technology, not politics, was what transformed Western economies in the nineteenth century (the Industrial Revolution)? Does anyone doubt that the invention of fire, the wheel, agriculture, ocean-faring ships with a magnetic compass, etc., were utterly transformative for ancient cultures, making the idea of an economy (thus an economist) possible in the first place?

Does anyone doubt that the invention of the microprocessor (followed a few years later by the worldwide networking of computers) was an epochal event? Surely all the people who are spending time and resources on bringing about an Internet of Things (or Internet of Everything; a $19 trillion global opportunity, according to Cisco) realize how transformative microprocessors will be seen, in future history books, to have been?

The impact of the transformation has yet to be fully felt. If we're to believe the widely cited study by Oxford University's Carl Benedikt Frey and Michael A. Osborne (2013), half of all jobs could go away soon, due to technology. Said Frey and Osborne:


According to our estimate, 47 percent of total US employment is in the high risk category, meaning that associated occupations are potentially automatable over some unspecified number of years, perhaps a decade or two. It shall be noted that the probability axis can be seen as a rough timeline, where high probability occupations are likely to be substituted by computer capital relatively soon. Over the next decades, the extent of computerisation will be determined by the pace at which the above described engineering bottlenecks to automation can be overcome. Seen from this perspective, our findings could be interpreted as two waves of computerisation, separated by a “technological plateau”. In the first wave, we find that most workers in transportation and logistics occupations, together with the bulk of office and administrative support workers, and labour in production occupations, are likely to be substituted by computer capital. As computerised cars are already being developed and the declining cost of sensors makes augmenting vehicles with advanced sensors increasingly cost-effective, the automation of transportation and logistics occupations is in line with the technological developments documented in the literature. Furthermore, algorithms for big data are already rapidly entering domains reliant upon storing or accessing information, making it equally intuitive that office and administrative support occupations will be subject to computerisation. The computerisation of production occupations simply suggests a continuation of a trend that has been observed over the past decades, with industrial robots taking on the routine tasks of most operatives in manufacturing. As industrial robots are becoming more advanced, with enhanced senses and dexterity, they will be able to perform a wider scope of non-routine manual tasks. From a technological capabilities point of view, the vast remainder of employment in production occupations is thus likely to diminish over the next decades.

Twenty years is an extremely short time period in which to sustain such a transformation. Common sense says there won't be time to come up with replacement jobs (by magic) for that many people. The usual Polyanna/triumphalism comeback that "new jobs will open up" rings hollow in the face of this kind of epic disruption.

Frey and Osborne correctly note that one of the main consequences of the introduction of technology duing the original Industrial Revolution was the de-skilling of jobs: Manufacturing operations that previously required highly skilled artisans were reduced to menial assembly-line work. The refactoring of labor that will take place in the next phase of the Technological Revolution will result in wholesale job loss, not merely de-skilling. But we do also see a new round of de-skilling happening now, as "good jobs" get replaced by crapified low-tech work. According to a recent news story,

Piketty makes no reference to any of this, which is surprising, since it's the story of the century and his book has "Twenty-First Century" in the title.

Maybe Piketty knows something we don't? If so, I wish he'd tell us about it.