The Fed's Most Powerful Tool Is Rhetoric

Goldman Sachs (aka Golden Sacks) produced a rather interesting little graph, which I learned about by way of The Economy Has Slowed Because the Fed Has Already Tightened (blogs.wsj.com): 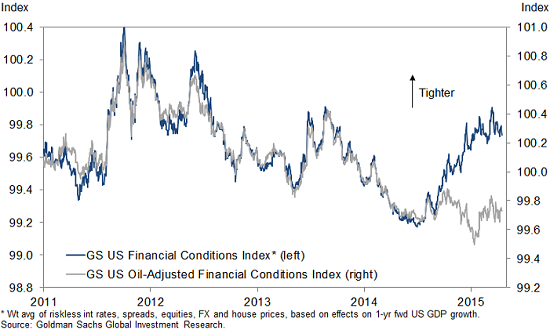 The key intuition here is that the economy is behaving as if money has tightened (note the upward-trending blue line at the far right), when in fact the Fed hasn't acted yet. Certainly, it feels true enough. Many money-pundits have noted that the low-oil-price pass-through to consumers hasn't really shown up in economic indicators. The economy is acting as if money has tightened already.

I don't pretend to know what's going on here (that's for professional economists), but it does seem we've entered a quasi-Orwellian phase in which 90% of the Fed's effectiveness now can be traced to rhetoric rather than action. The only thing FOMC members have to do is speak, and the economy responds. Expectations become self-fulfilling. For example, according to Bloomberg, "The more investors believe the central bank will soon raise rates, the more the dollar appreciates, and in turn, the more inflation will fall short of the Fed’s goal." From a story at thecrux.com:


“Appreciation [of the dollar, versus other currencies] is likely to persist as long as U.S. monetary policy is expected to diverge from that of other major economies,” said Carl Riccadonna, Bloomberg Intelligence chief U.S. economist.

How convenient is that? If expectation drives reality, the Fed needn't sully itself any longer with actual interventions. It can just manage perceptions. So far, that's been working well enough.