My post earlier this week on Why the Super-Rich Get Richer apparently struck a chord. It got 10,000 views in 12 hours—far short of viral, but several times normal traffic.

I wish Hillary Clinton would read it. She needs to drop the phony populist rhetoric around taxing the rich and recognize that the (very real) problem we colloquially refer to as "income inequality" is not subject to a Bandaid fix involving tax schemes. Income inequality was not caused by inadequate taxation. It won't be fixed by excessive taxation.

What might help is if an all-star panel of experts (including economists and historians) could study the problem and agree on possible explanations (so, candidate explanations, otherwise known as hypotheses) that can be tested, evaluated, ranked, and discussed with an eye toward possible policy recommendations that might bear fruit in our lifetime. It would be good if the discussion were public and evidence-based, although that might be too much to hope for.

I have previously hinted at what I feel the core driver of the mayhem is—namely, the Moore's-Law-propelled efficiency gains made possible by digital technology coupled with Internet-scale connectivity. Huge multiplier effects are inherent in anything that leverages networks of microprocessors, particularly when the power of the processors, the size of the network(s), and the degree of connectivity all increase geometrically over time. The productivity gains made possible by networked digital technologies have been immense. Human physical interaction is the only serious choke point, and indeed humans are now arguably the chief source of friction in an economy that's largely been automated. (But don't worry, we're working hard on eliminating humans from the system altogether!)

Productivity has risen at more-or-less-expected historical rates (even if wages have mostly remained flat since 1975) and the question is often asked why productivity, if it's tied to Moore's Law, hasn't risen exponentially. (This is the Solow paradox.) The answer is that consumption and production are gated by human physical reality. If agricultural production, through some miracle of technology, suddenly goes up by another factor of ten, people aren't magically going to eat ten times more food (although heaven knows, Americans try). Rather, an amount of food commensurate with demand will be sold, but with producers suddenly able to pocket a 90% efficiency gain as unexpected profit.

The winners have been pocketing unexpected gains for decades, and we're now seeing the result as wealth (and income) inequality. But this may be just the beginning of a new, dark chapter in the history of capitalism.

As Jonathan Taplin notes in a poignant long-form post at Medium:

Peter Thiel, the founder of PayPal, and an early investor in Facebook, may have unwittingly tipped the hand of some of his fellow robber-barons plutocrats when he said: “I no longer believe that freedom and democracy are compatible.” Tellingly, Thiel admits he does not believe in competition, having stated clearly, in The Wall Street Journal, “Competition is for losers. If you want to create and capture lasting value, look to build a monopoly.”

Thiel may not speak for all technoplutocrats, but the actions of the plutocrats speak for themselves. Tech firms suck up hundreds of billions of dollars of capital while employing practically no one. Facebook, for example, with a market cap of over $200 billion, employs 10,000 people (not all in the U.S., of course) while Ford, with a market cap of $62 billion, employs 187,000. If you don't like that particular example, there are plenty of others to choose from. The point is, technology firms are not "job creators"; tech companies voraciously hog capital while creating vanishingly few jobs. Hardly a mall in North America hasn't been gutted by Amazon. Are those mall jobs now being replaced by jobs at Amazon? Hell no. How about all the UPS truck drivers who soon won't be delivering all the packages that (if Amazon has its way) will be delivered by drones instead? Jobs gone. Forever. (But don't worry. We won't have to wait for drone delivery to put UPS drivers out of work. Shyp will do it first.) 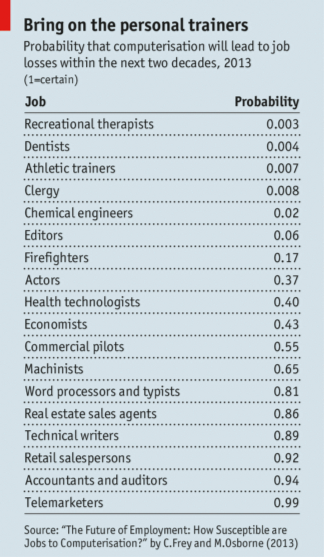 Meanwhile, technological unemployment is working its way through the economy, top to bottom, front to back, taking with it good jobs and bad ones, indiscriminately. Citing work from Oxford University, The Economist not long ago wrote that “jobs are at a high risk of being automated in 47% of the occupational categories into which work is customarily sorted.” (See examples at right.)

Digital technology and connectivity are the enablers of this new post-industrial revolution, a revolution that employs an ever-shrinking Mandarin class of uber-programmers while shifting countless others (educated or not) into crapified part-time benefits-reduced/on-demand work, while the Peter Thiels and Mark Zuckerbergs of the world pocket huge profits that will never be redistributed except in the form of the occasional stock buyback or special dividend payment.

This is a structural problem with modern capitalism, one that won't easily admit to a quick Bandaid fix. (Taxing the rich won't, in and of itself, create jobs or prevent new plutocrats from sucking hundreds of billions of dollars out of the economy and buying elections.) We need to get rid of corporate personhood while we still can, and we need to fix the "economic singularity," the unintended side effect of technology, that has (evidently) given birth to a plutcocratic nightmare-world in which the future is owned by Peter Thiel and his kind. We need to fix this while we still can. Assuming time hasn't, in fact, already run out.