A pet theory of mine is that HR (the organizational feature of the corporate machine by virtue of which "humans" become "resources") constitutes the single most destructive component of the corporate landscape and the one "system" that, were its effect on an organization to be measured objectively (with the numeric metrics so broadly advocated by its own practitioners), would readily be seen as the single most pernicious, counterproductive element of the entire corporate apparatus. There can be little doubt that HR, at this point, serves mostly as a propaganda machine for perpetuating myths of its own essentiality. In so doing, it cleverly and methodically (in Hegelian fashion) brings about the preconditions for its own continued hegemony, ensconcing itself as a politburo beyond reach within the corporate labyrinth, an island of power, answering to no one, dictating to all. Hence it is impossible to eradicate, like a cancer that has insinuated itself into the vasculature of surrounding tissues. 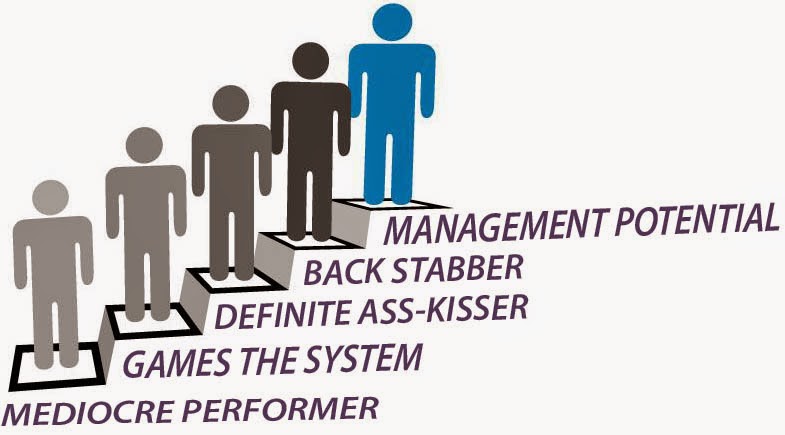 One of the signature work products of the HR overclass, a feature now found throughout corporate America, is the periodic performance review. Arguably, this is not an invention of HR per se, since such reviews apparently existed as far back as third-century China, but by the 1980s GE CEO Jack Welsh’s “rank-and-yank” system had become a commonplace in corporations around the world, a symbol of compliance with the Drucker "management by objectives" mantra, unassailable evidence of corporate commitment to "excellence."

The trouble is, it doesn't work. In fact, it not only doesn't work, it's demonstrably counterproductive. Like so many HR inventions, the performance review actually adds negative value.
Charles S. Jacobs, author of Management Rewired: Why Feedback Doesn't Work and Other Supervisory Lessons from Brain Science, notes that the brain is wired to resist what is commonly (and disingenuously) called constructive feedback, which turns out to be received as negative criticism. Neuroscience has shown that when people encounter information that is in conflict with their self-image, their tendency is to change the information rather than change themselves. So when managers give performance appraisal feedback to employees, the latter's brain defense mechanisms are activated, and any motivation to change is thwarted. This is intuitively obvious to anyone who has been through a performance review, but is apparently beyond the understanding of the HR mind.

Stanford University Professor Bob Sutton notes that doing performance evaluations well is like doing “blood-letting well—it is a bad practice that does more harm than good in all or nearly all cases.” Sutton argues, in his book (with co-author Jeffrey Pfeffer, a psychologist) Hard Facts, Dangerous Half-Truths And Total Nonsense, “performance rankings can lead to destructive internal competition, which can make it tough to build a culture of knowledge sharing. In addition, there seems to be a self-fulfilling prophecy at work, in which a person who receives a poor evaluation does even worse in the subsequent rating period.”

What to do? Quite simply, stop. Whether you're a manager or a line employee, just refuse to participate in performance reviews.

When I was a manager at Novell (circa 2007), HR decided, as part of its ongoing dogma around process of "accountability" and "measurement," to require quarterly performance reviews (in addition to annual reviews). Fewer than half of managers complied. Most managers were fed up with the process and saw it as the counterproductive HR busywork it was. Meanwhile, no line employees complained about managers failing to conduct reviews. HR went into a tizzy, but found it lacked the muscle to enforce its own policies.

I might add, parenthetically, that during the entire seven-year period I worked for Novell, the company never made a profit. (This was after Eric Schmidt's era. It didn't prosper under him, either, though. At Google he's a genius; at Novell we was just another inept CEO.)

Bottom line: Just boycott the review process. It's meaningless. It adds negative value. Like HR itself, it needs to die.